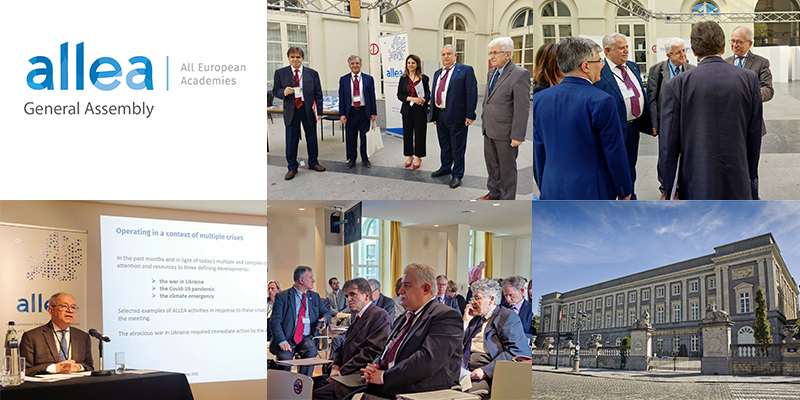 The General Assembly Meeting of the Union of European Academies (ALLEA), of which TÜBA is a member, was held in Brussels on 11-12 May this year.

Home of The Royal Academy of Sciences of Belgium (ARB) and the Royal Flemish Academy of Belgium for Science and the Arts (KVAB) hosted the General Assembly in Brussel. At the first session of the business meeting, the financial report and annual report were presented. In the next session, the result of the next ALLEA board was announced. Prof. Dr. Neri Salvadori from Italy, Prof. Dr. Maaten Prak from the Netherlands, Prof. Dr. Pawel Rowinski from Poland, Prof. Dr. Pere Puigdomenech from Spain, Prof. Dr. Ylva Engström from Sweden, Prof. Dr. Lara Keuck from Germany, Prof. Dr. Eriks Jekabsons from Latvia, and Prof. Dr. Camillia Serck-Hanssen from Norway were elected a member of the 2022-2024 ALLEA Board.

TÜBA President Prof. Dr. Şeker addressed in his speech that while ALLEA continued its corporate effectively during the pandemic process, it carried out successful works with thematic sessions that were organized during the most difficult times of the global outbreak. Nowadays, apart from the destruction caused by the Covid-19 pandemic, this time we are faced with a sad war. After the Russian invasion of Ukraine, world science academies gathered on a common ground more than ever and published messages of unity and solidarity. TÜBA's Statement on the Situation in Ukraine underlined that peace and reconciliation should be realized as soon as possible, a ceasefire should be implemented and subsequent agreements should be made. A workshop titled ” was also held. A final report created after the workshop analysis was shared with the Turkish public. I believe that the value of science and scientists became more evident during the pandemic period and the international crisis. The perspectives and suggestions of scientists for a livable future should play a greater role in determining a country's policies.

Prof. Şeker; wished success to the new ALLEA board members and invited them to work closely with member academies. He also said that TÜBA would be pleased to cooperate on any scientific issue related to pandemics and worldwide crises. He emphasized that the Turkish Academy of Sciences will give all kinds of support and contribution to the steps to be taken for a livable world and a sustainable life. He wished that pandemics and international crises would be ended as soon as possible for a peaceful world.

The opening of the "Transforming Science" Symposium held on the second day of the General Assembly Meeting was made by ARB Permanent Secretary Prof. Dr. Didier Viviers and ALLEA President Prof. Dr. Made by Antonio Loprieno. Thomas Dermin and Maria Gabriel “Transforming Science for the Future”, Prof. Dr. Marion Koopmans, on the other hand, spoke under the headings “Building the Ship while Sailing: The Challenges of Scientific Advice during an Emerging Crisis”. In addition to the three sessions held at the symposium, an evaluation panel was also held. The closing speech was made by Prof Karel Velle Permanent Secretary of the Royal Flemish Academy of Belgium for Science and the Arts (KVAB).

ALLEA; Established in 1994, is the European Federation of Academies working in the fields of Sciences and Humanities. Bringing together more than 50 science academies and societies from more than 40 countries, ALLEA gathers Academies from both EU and non-EU countries under its umbrella and works in partnership with its member Academies thanks to its integrated membership structure. ALLEA, which encourages the sharing of knowledge and experience and international scientific cooperation among academies, and contributes to the improvement of the environmental conditions in which science can develop, work to ensure academic freedom and autonomy in the fields of science and research. https://allea.org