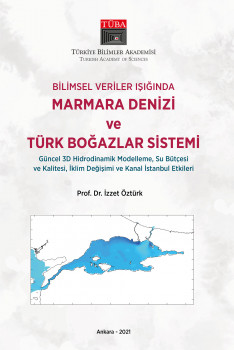 The Turkish Straits System, consisting of the Bosphorus and Dardanelles straits along with the Marmara Sea, has been formed ~7500 years ago, and is considered to be unique with its two-layered current structure. This book titled as “The Marmara Sea and the Turkish Straits System” has been prepared with the purpose of being an original source based on current scientific & environmental data supported by hydro-dynamic modeling outputs for the university students of the environment, civil, meteorological engineering, and marine sciences departments, as well as colleagues who are interested in this field. In this book, which consists of a total of 7 chapters, various books, projects, technical reports, scientific articles, and papers related to the subject were examined to be compared with the results obtained by the 3D hydrodynamic modeling specific to the study. The Turkish Straits System has been modeled with high resolution Delft 3D HD software to cover the whole of the Black Sea and the North Aegean regions as well. In Chapter 1 of the book, the geological, geographical, hydrographic, hydrological, and oceanographic features of the Turkish Straits System, along with Marmara and Black Seas are explained. Chapter 2 is devoted to the history of the idea of treated wastewater discharge into the Bosphorus and the explanation of its engineering basis. In Chapter 3, the results of recent water quality studies conducted in the Bosphorus, the Golden Horn and northern Marmara are presented. Chapter 4 examines thoroughly the environmental effects at the Marmara and Black Sea regions regarding the high-flow treated wastewater discharges from Istanbul to the Bosphorus entrance and bottom, and pollutant transports to the Bosphorus originating from the Black Sea. Chapter 6 is devoted to the results of the 3D HD Modeling work carried out for the Turkish Straits System specific to this book, including the possible Channel Istanbul (CI) scenarios. In Chapter 7, the hydrodynamic structure predicted to occur after CI at the Marmara Sea and Turkish Straits System, and the possible effects of this new phenomenon on the water budget, oceanographic structure, water quality and ecological status (taking into account the climate change predictions to a certain extent) are discussed. In this book, rational engineering analyzes based on reliable and consistent scientific data and environmental findings have been carried out, and utmost care was given to avoid subjective and speculative evaluations.