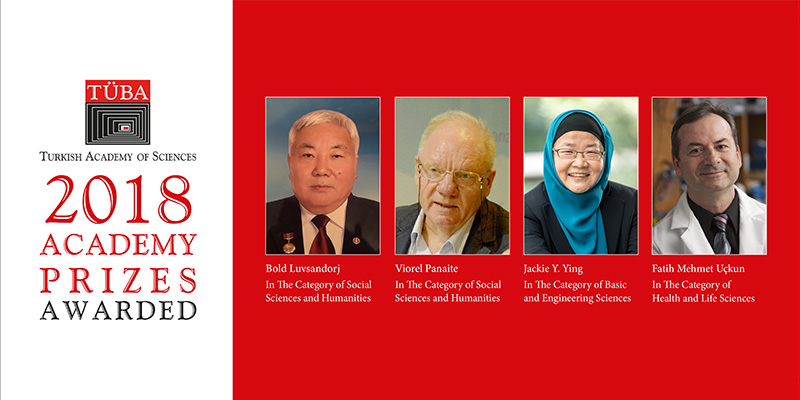 Fatih Mehmet Uckun, of Minnesota University and Ares Pharmaceuticals, has been awarded in the category of Health and Life Sciences in recognition of his works in new treatment modalities against CD19 improving the results in the treatment of leukaemia and lymphoma with worst prognosis.

Academy Laureates in Social Sciences and Humanities
Prof. Dr. Bold Luvsandorj
He was born in 1947 in Mongolia.­ After his first studies on Mongolian, Turkish, and Altaic languages in general, Professor Luvsandorj, who has been working at the Institute of Language and Literature at the Mongolian Academy of Sciences since 1971, developed his field of study on the historical relations of Mongolian, Uighur-Uranhay and Sayan Turkish. Luvsandorj has works on the Turkish language and dialects spoken in the People’s Republic of Mongolia, the Turkish words in the Modern Mongolian languages and their philological importance and they are considered as basic references. Luvsandorj, who is the science coordinator and chief editor of the most comprehensive dictionary ever published in Mongolia that brings serious contributions to the literature  on studies about Göktürk inscriptions and their methodology, also stands out with his lexical studies. Professor Luvsandorj, faculty member at National University of Mongolia and member of Mongolian Academy of Sciences, is the recipient of the Order of the Polar Star, the highest state medal of Mongolia.

Prof. Dr. Viorel Panaite
He completed his doctorate in 1996 at the University of Bucharest. In 1991 he started to work as a researcher at the Romanian Academy. Prof. Dr. Viorel Panaite, Graduate Director of the Faculty of History at the University of Bucharest and Ottoman History Specialist, is a senior researcher at the Institute of Southeast European Studies of the Romanian Academy. Prof. Panaite, who has been working as professor of Islamic and Ottoman History at University of Bucharest since 1944, was a Visiting Researcher and Faculty Member at leading institutions of the world such as the European Institute in Florence, the Washington Folger Shakespeare Library, the Paris School of Social Sciences for Advanced Studies (Ecole des Hautes Etudes en Sciences Sociales), and Princeton University. Prof. Panaite has the Nicolea Iorga Award, one of Romania’s most prestigious awards.

Academy Laureate in Basic and Engineering Sciences
Prof. Dr. Jackie Y. Ying
Born in Taiwan, grew up in Singapore and New York, Prof. Ying graduated from the Department of Chemical Engineering at Cooper Union in New York in 1987. She received his Ph.D. in material chemistry at Princeton University. She conducted post-doctoral studies in the development of new materials in Prof. Herbert Gleiter’s laboratory (Institute for New Materials, Saarbrücken, Germany). In 1992, she was appointed as a faculty member to the Department of Chemical Engineering at Massachusetts Institute of Technology (MIT). At the age of 35, she was the youngest professor of the department until then. She is currently Executive Director of the Bioengineering and Nanotechnology Institute of Singapore and has more than 180 patents. Professor Ying is a member of the UK Royal Society of Chemistry and the German National Academy of Sciences (Leopoldina). She is the recipient of numerous awards, including Mustafa Prize.

Academy Laureate in Health and Life Sciences
Prof. Dr. Fatih Mehmet Uçkun
He completed his elementary and high school education in 1977 as the top student at tje German School of Istanbul. He received his medical education at the Heidelberg University School of Medicine in Germany in 1983 with a scholarship from the German government. He completed “Immunology and Bone Marrow Transplant” post-doctoral researcher education at University of Minnesota, USA; specialty education at Department of Child Health and Diseases; and Child Oncology specialization training. He was president of the Institute of Biotherapy from 1995 to 1997 at the University of Minnesota Medical School, USA, and president of the Hughes Institute in Minnesota from 1997 to 2008. Prof. Uçkun worked as a professor at the University of Southern California, Los Angeles between 2009 and 2015 and continued his scientific work at the Children’s Cancer Center as the Head of Leukemia-Lymphoma Research Department at the same university. From 2008 to 2016, he held leadership positions in the National Cancer Institute’s Nanotechnology Program, USA. Prof Uçkun has been working as the chairman of Ares Pharmaceuticals Executive Committee and Executive Medical Director of Syneos since 2015. Professor Uçkun is also the holder of the American Leukemia Society, the Sedat Simavi Foundation, and the TÜBİTAK Incentive and Science Awards.