Nominations for 2021 TÜBA Academy Prizes, launched in 2015 in appreciation and encouragement of eminent scientists, are now open and will be continued to May 21th, 2021. 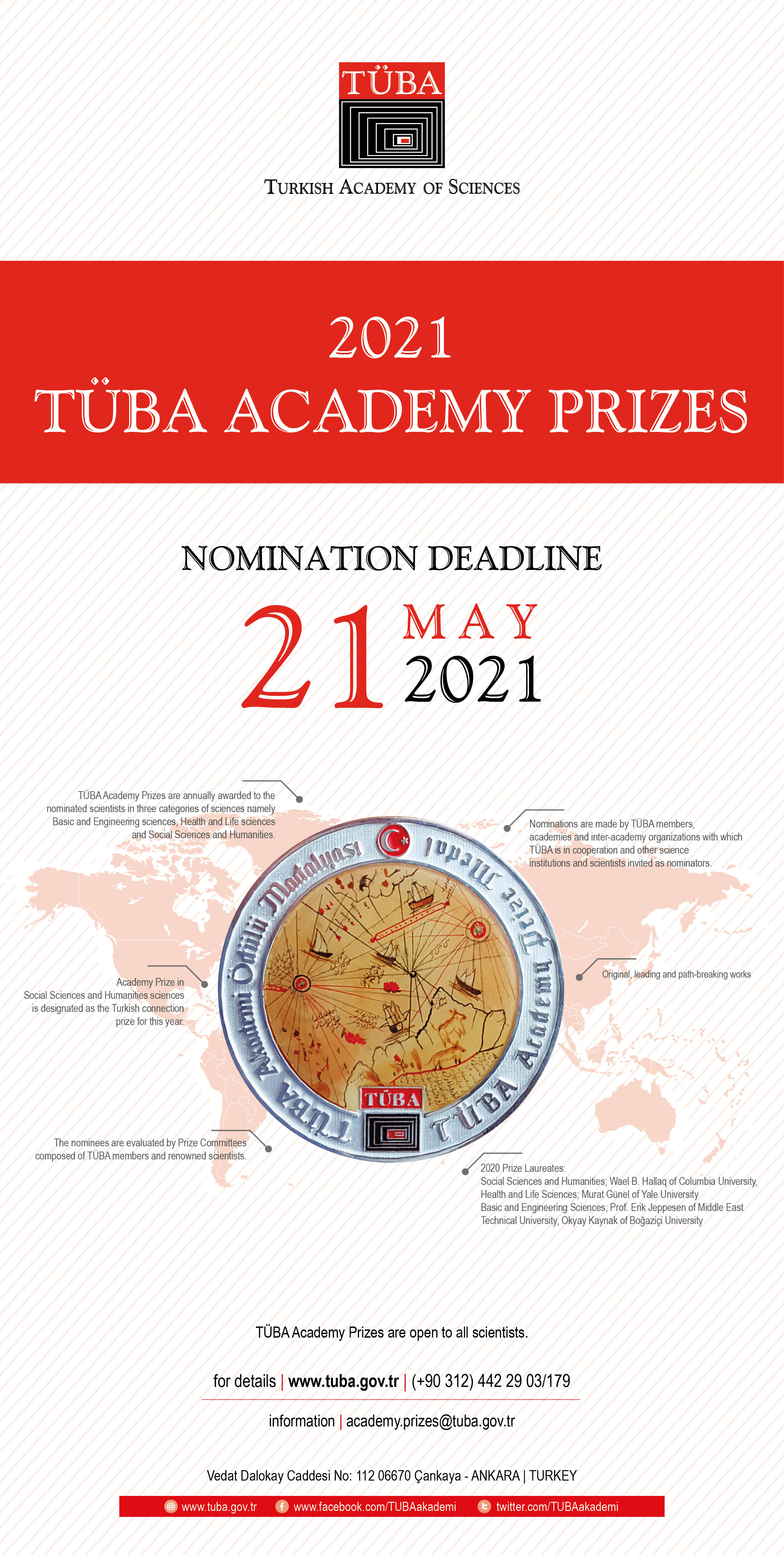 Saying that TÜBA gives importance the rewarding scientists and scientific achievements in his statement, TÜBA President Prof. Dr. Muzaffer Şeker added that 2020 TÜBA Academy Prize in the Social Sciences and Humanities Prof. Wael B. Hallaq from Columbia University, in Health and Life Sciences Prof. Murat Günel from Yale University and in Basic and Engineering Sciences Prof. Erik Jeppesen from Middle East Technical University and Prof. Okyay Kaynak from Boğaziçi University has been awarded.

Prof. Şeker continued his words: “As we aimed when creating the TÜBA Academy Prizes in 2015; the prize program, which we have been conducting with great care for six years, on the basis of merit, as it should be, has succeeded in creating a significant impact and value in the international scientific community in a short time. We think that the reason for the intense interest we encounter is of course the evaluation processes we work with meticulously. We are carrying out a labor-intensive work to increase this honor every year on behalf of our academy and country. Our award program is carried out under the auspices of the Presidency. This situation gives us more responsibility. The Award Committees finalize the nomination process, which stand out with their pioneering, original and groundbreaking features, together with the opinions of the referees. Among the candidates nominated by TÜBA members, university rectors, world science academies, international academic institutions and other individuals and institutions invited by TÜBA, the laureates will take their awards from President Recep Tayyip Erdoğan at the ceremony held at the Presidential Complex, as it is every year”

One prize is awarded in each category and every year one of the prizes is awarded to scientists related with Turkey or Turkish issues, meaning those who work in Turkey and/or study Turkey. Academy Prize in Social Sciences and Humanities is designated as the Turkish connection prize for this year.

TÜBA Academy Prizes, which will be delivered with TÜBA-GEBİP and TÜBA-TESEP Awards, are annually awarded to the nominated scientists in one of the following categories of sciences namely; Basic and Engineering Sciences, Health and Life Sciences and Social Sciences and Humanities. TÜBA Academy Prizes are given to those scientists with original, leading and path-breaking works in their fields. The nominees are evaluated by a Prize Committee in each category. The Committees, composed of TÜBA members and renowned scientists, examine the works of the candidates via a rigorous process involving peer-review and identify the possible prize laureates. The laureates are announced by the Academy Council of TÜBA. The Academy Prizes, comprising an Academy Medal and prize money of about 30.000 USD for each, are awarded in a special ceremony. The Prize Ceremony is held under the auspices of the President of the Republic of Turkey.

Members of TÜBA and those who take part in the evaluation process of the prizes cannot be nominated. And also the nominees shouldn’t have received any another science award from public institutions and organizations in Turkey for last three years.